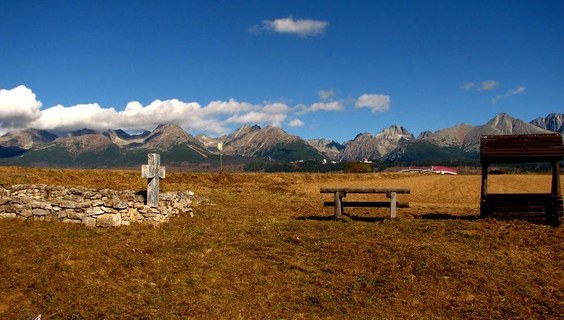 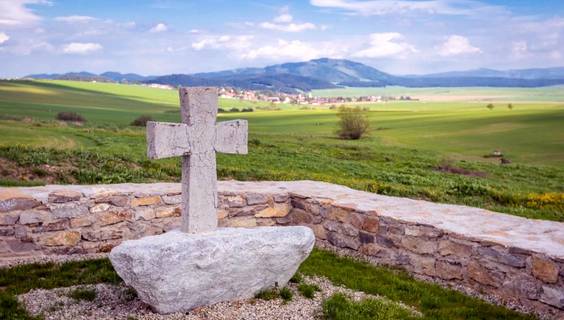 Location on the outskirts of the Sub-Tatran village of Štrba offers a mysterious way to the Middle Ages. In 1951-52 the foundations of the extinct medieval settlement of Šoldov were uncovered here. The settlement disappeared in the second half of the 15th century in a violent way, probably during fighting against “bratríci” (later Hussite soldiers).

During archaeological research, in addition to a number of valuable historical artifacts, even skeletons of people over 200 cm tall have been found here. That's it is said that giants once lived here.

Another of the many stunning finds that have been uncovered here are the foundations of a church from the end of the 13th century / early 14th century. They were reconstructed, as well as, a stone wall along the northern side of the church, which the old people built to protect the church from snow and water.

The site is freely accessible to the public. There is also a memorial, an information board and a small seating area. A cycling route leads just around the village.

You may need some: accommodation Štrba

Nearby things to do at Extinct medieval settlement of Šoldov

The Važec military cemetery was completed in 1998 and approximately 6,500 German soldiers from the battlefields of eastern and central Slovakia have found their last rest...

*ATTENTION! From 6.7.2020 to 31.5.2021, the railway is out of operation due to reconstruction. Instead of wagons, buses will run according to the traditional ZSSK schedul...

Chalet of Štrba is a unique ethnographic museum in the village of Štrba, which offers a view of the authentic environment of the foothill village with the original, prese...

Imagine sweetness of doing nothing in the hot tub, the proximity of the mountains and clean air. Treat yourself to a delicious coffee while observing your kids playing in...

The Liptov village of Važec is one of the few that can boast their own museum. But this one in Važec is truly something special. The Museum of Folk Traditions originated ...

Važec Birutova Ski Resort is located in the village of Važec. The resort belongs to the smaller ones, but attracts visitors especially with beautiful panoramic views of t...

The Važec Cave is 530 meters long and is located in the Važec Karst, on the western edge of the village of Važec.

In its underground spaces, there are mainly stalactites...

There is probably no tourist who would not know the most famous Tatra lake - Štrbské Pleso. However, only a few know that this beautiful natural gem has its "twin", albei...