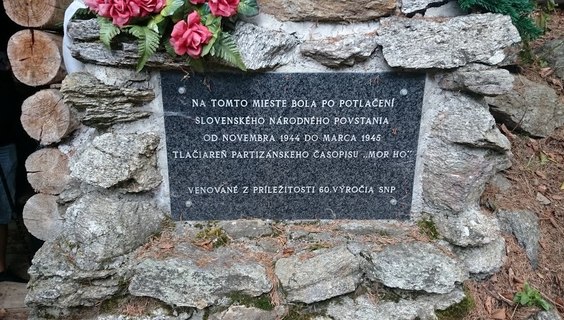 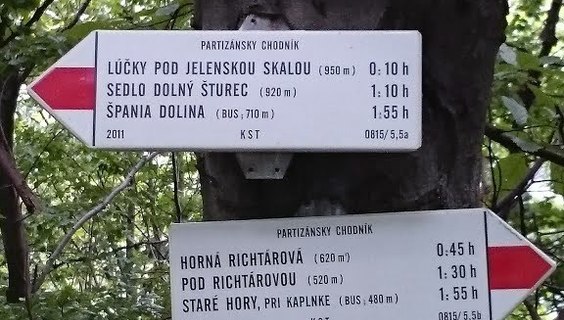 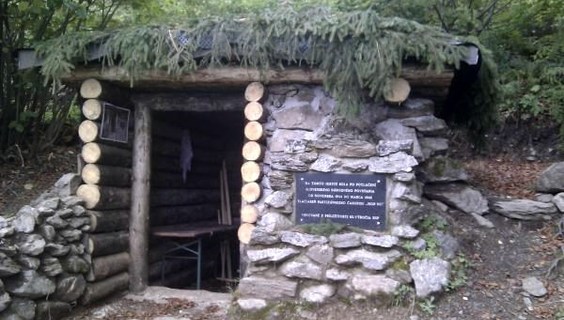 It is a long time ago that Staré Hory (Old Hills) was an important part of the Partisan Republic, which was created after the suppression of the Slovak National Uprising. However, this important stage in the history of Slovakia has not been forgotten, and the spirit of these times is still reminded by the partisan bunker called Mor ho!

The bunker Mor ho! It is located under the Jelenia Rock and in winter at the turn of 1944 -45 there was the headquarters of the brigade "Avenger" of Major Morosov. Here, he created and printed the magazine Mor ho! (Kill Them!) and there was also an important call center that provided communication between partisan groups.

The bunker is now reconstructed and freely accessible to the public. There is also a plaque commemorating its former meaning. The fact that the bunker was indeed superbly concealed is confirmed by its modest size and narrow path leading through dense forest and bushes.

Partisan bunker Mor ho! is one of the stops of the Partisan Educational Trail. The bunker Mor ho! is accessible even after a short unmarked turn from the red marked hiking trail connecting Špania Dolina and Staré Hory.

You may need some: accommodation Staré Hory

Nearby things to do at Partisan bunker Mor ho!

n the village of Špania dolina there is a small educational Mine Trail. The educational trail starts directly on the square near Klopačka. The walkway can be reached in a...

The Astronomical Clock has become an essential part of the village of Špania Dolina, as well as a popular and sought-after attraction. It is a unique musical astronomical...

When you say "Špania Dolina", everyone in Slovakia will immediately experience beautiful nature, a rich tangle of hiking trails or excellent skiing. However, Špania Dolin...

Šachtičky Ski Resort is located in the mountains near Banská Bystrica. It is suitable for recreational skiing for casual as well as professional skiing for demanding skie...

A beautiful piece of land that offers a unique view of the vast plains, mysterious forests, picturesque villages and majestic hills in every season. Location so close to ...

Majer's Rock is a unique natural creation. Thanks to its uniqueness and natural exceptionality, it is included in the natural monuments of Slovakia.

An interesting excursion point near Banska Bystrica is Panský diel Hill, which offers much more than just beautiful views. Directly below it is one of the most interestin...

At the foot of the southern slopes of the Low Tatras, deep in the mountains among the coniferous forests, a silent witness of horrors lies. In the slightly sloping valley...