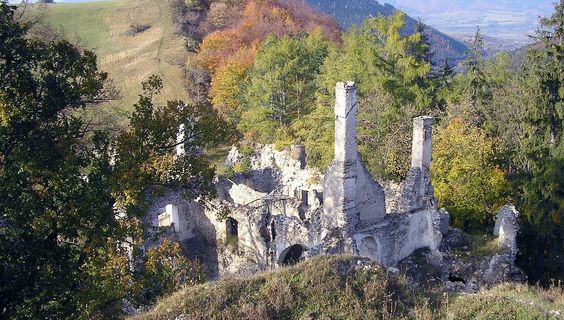 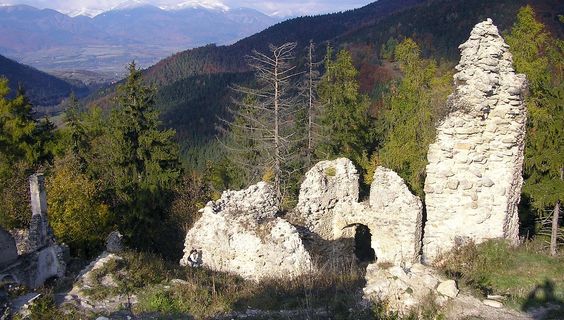 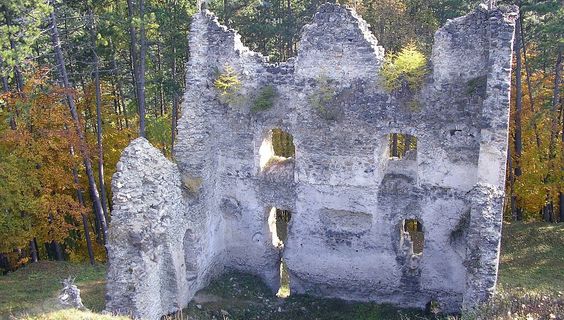 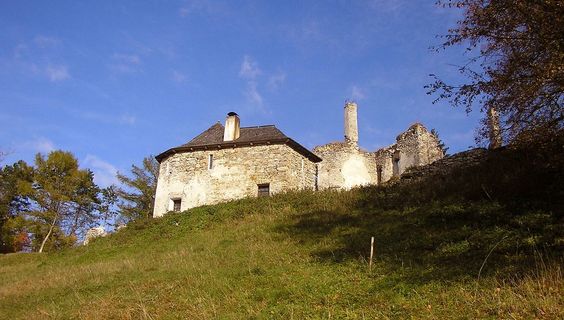 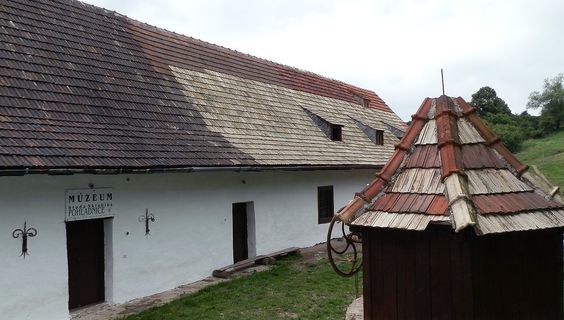 If you have ever traveled by car in the direction of Martin, you have certainly seen the ruins of Sklabiňa Castle in the distance, just near the picturesque village Sklabinský Podzamok. The ruins of the castle are situated on the hill of a wooded conical hill directly above the village.

The castle was built in the middle of the 13th century in the old hillfort. It used to be a royal castle and seat of Turčianska County. In 1436, the castle was hit by a devastating fire. The castle was subsequently repaired and rebuilt several times.

The dominant of the castle complex was a huge prismatic tower, situated on the highest point of the castle. At the beginning of the 17th century a comfortable Renaissance mansion grew up in the bailey. At the end of 1944 the Germans blew up the mansion during the military action and burned it together with the Sklabinský Podzámok.

To date, a significant part of the masonry of the chapel with Gothic vaults, parts of the tower and palaces, farm buildings, fortifications, bastions and mansions have been preserved. Sklabiňa Castle is very well and easily accessible. It can even be accessed by car. Those who want a light and short walk can walk directly from the village.

The castle also includes a private museum, which can be visited and, thus, visitors can get acquainted with the history of the castle and its owners. The castle also hosts annual castle festivities.

You may need some: accommodation district Martin

Nearby things to do at Sklabiňa Castle

The rock emblazoned with dark legends rises above the village of Sklabinský Podzámok. The peak provides a wonderful semi-circular view of the Greater Fatra, part of the T...

A pleasant location for a family trip is definitely Teplické serpentines. It is a set of lakes and creeks on the slope of Teplica Hill above Turčianská Štiavnička flowing...

!! Due to reconstruction, the park and mansion are not currently open to the public !!

On the edge of a large English park in Turčianská Štiavnička, there is a Renaissan...

The rural environment of the Turiec region around the villages of Turčianske Jaseno, Belá - Dulice and Kalník literally attracts hiking, weekend walks and cycling tours. ...

The monumental rock, which rises above the village of Sučany near Martin, is popular especially among climbers, but it also has something to offer to travellers or touri...

The Jasenská Valley Ski Resort is located in the Greater Fatra Mountains. There are two ski centers - Kašová and Lehota.

The Kašová Resort is located in the lower part o...

The Kalník tourist tower is located above the village of Bela Dulice near the city of Martin. It is set in a quiet and beautiful natural environment with excellent locati...

In area of Pizza Pub OREA, we have opened the biggest children's amusement park in the Martin region. It is aimed at children between 1.5 and 14 years of age.