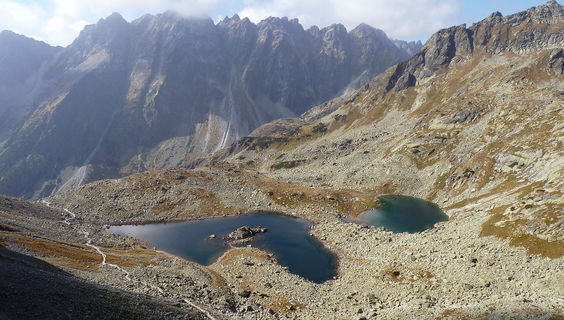 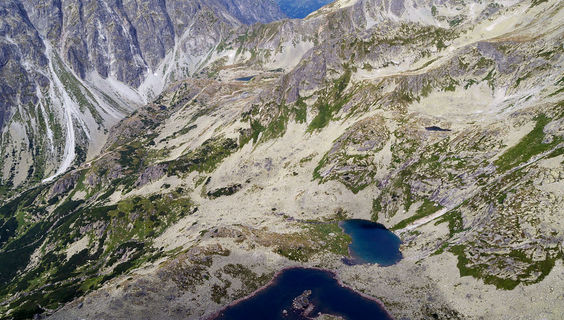 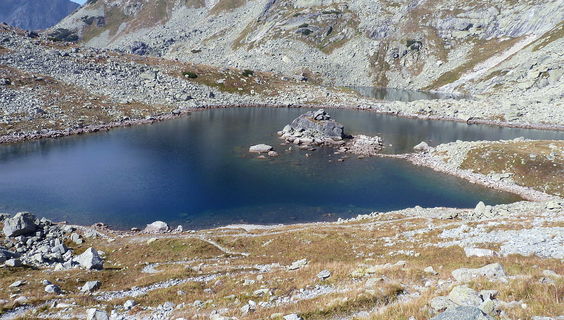 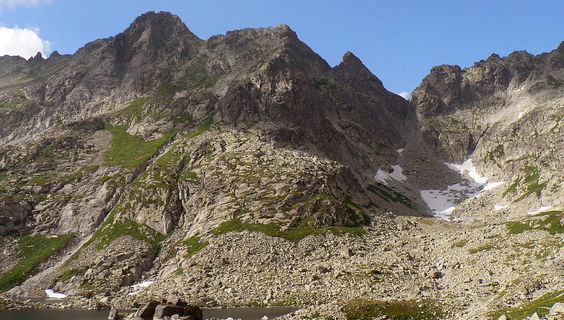 The name Žabie plesá (Frog mountain lakes) are borne by three charming mountain lakes - Great, Small and Upper Frog Lake, located in the basin of Žabie plesá in Mengusovská Valley. They are surrounded by rough and wild, rocky peaks. Apparently, they got their name after stone islands in the middle of the Great Frog Mountain Lake, which resemble a frog.

Veľké Žabie pleso (Great Frog Mountain Lake) is located in the upper part of the basin of Žabie plesá at an altitude of 1,919 m above sea level. It is the largest and most visited, as it lies right next to the tourist route leading to Rysy. In the past, it was connected to the Small Frog Mountain Lake.

Malé Žabie pleso (Small Frog Mountain Lake) is the lake laid lowest. The Žabí brook flows out of it and after about two kilometers it flows into the Hincov brook. The lake has a crescent shape, but gradually it is filled with rock avalanches, and thus it is getting smaller.

Vyšné Žabie pleso (Upper Frog Mountain Lake) lies in a small basin under the walls of the Volia Veža Peak at an altitude of 2,040 meters above sea level. This lake is without a tributary and is inaccessible to tourists.

Žabie plesá is a pleasant stop on the tourist route leading from Popradské Mountain Lake through Mengusovská Valley to Rysy.

You may need some: accommodation Štrbské Pleso

Nearby things to do at Žabie plesá (Frog mountain lakes)

Rysy are an iconic peak of the Tatras located in their main ridge on the Slovak-Polish border. They are credited with many precedences - the highest peak of Poland, the h...

The largest and deepest mountain lake on the Slovak side of the High Tatras is called the Veľké Hincovo pleso (Great Hincovo Mountain Lake). It is not unknown to Tatra to...

Popradské pleso (Poprad Mountain Lake) is an iconic location for any hiking in the High Tatras. It is a place that no visitor to the Tatras should miss.

Kôprovský Peak (i.e. Dill Peak) is a distinctive Tatra peak located in the saddlebow of Kriváň. It is very popular among the visitors of the Tatras. After all, who would ...

In the idyllic environment of the limb grove, near the Poprad Mountain Lake under the western sides of Ostrva Hill, there is a memorial place, which is frequently visited...

Ostrva is one of the most visited Tatra peaks. It reaches an altitude of 1984 m above sea level. It is located on the side ridge of Končistá Hill, with beautiful views of...

The dominant of the beautiful Mlynecká Valley is the charming alpine Capie pleso (Billy Goat Mountain Lake). It is located at an altitude of 2000 m above sea level. As we...

If you are looking for an undemanding and not long hike in the Tatras, you should definitely go to Mlynická Valley to the Skok Waterfall. This waterfall with a height of ...