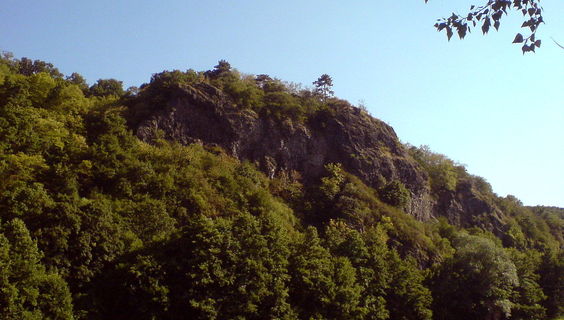 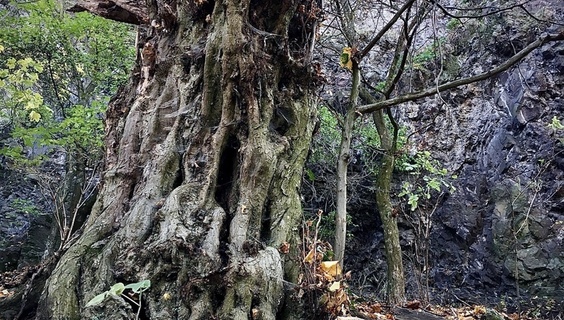 The Hillfort of Krivín is a natural site of volcanic origin. Specifically, it consists of forested rock cliffs rising above the Hron River near the villages of Psiare and Rybník. Krivín itself consists of two rocky outcrops, named *Big and Little Krivín *according to the size.

However, the area is not only interesting in terms of nature, but it has also historical significance.In the past, there was a Slavic fortress in Krivín and even today there are remarkable remnants of defensive walls. It can be assumed that this fort was wooden. In addition to a convenient, hard-to-reach location, Hradiště at Krivín also had** an acoustic advantage** in that the arrival of the enemy on horses could be heard from far away.

Since 1993, it has been a nature reserve and belongs to the Protected Landscape Area of Štiavnické Hills. It is of great importance for the appearance of a large number of protected, rare and endangered plant and animal species.

From the rocks of Krivín, which fall down perpendicularly into the valley, there is a beautiful view of the surrounding countryside and especially the beautifully winding river Hron, which is directly below you. The marginal parts are steep and dangerous, so if you go there with children, you need to be really careful.

Krivín lies on the left side of Hron and you can get to it from Tlmáče along a significant route from the railway station (about 6 km away). The ascend is not very demanding. There is also an educational trail that begins and ends in Rybník. Other starting points can be Psiare or the longer route from Tekovska Breznica.

You may need some: accommodation Tlmače

Nearby things to do at Hillfort of Krivín

The Benedictine monastery in Hronský Beňadik is made up of a group of fortified sacral buildings. Preserved monastery and church are among the most valuable Gothic monume...

The distinctive village of Tekov region called Čajkov is not only known for its excellent wine, beautiful and richly decorated folk costumes, but also for its beautiful n...

Easy navigation on stagnant water through the remnants of floodplain forests suitable for beginners and children.

Wade through a small piece of jungle - become silent ob...

An attractive setting on the banks of the Hron River is a place where you will experience a plenty of adventures, active relaxation and a symbiosis of nature and animal k...

The charming Pohronský Inovec mountain range is a tangle of attractive hiking trails that offer excellent yet unpretentious hiking. The highest point of this mountain is ...